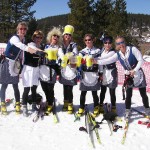 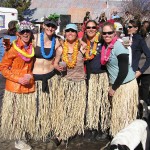 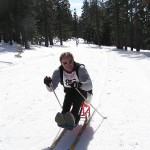 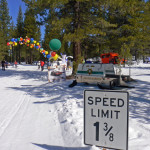 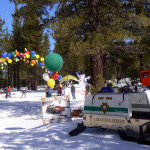 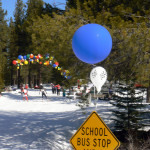 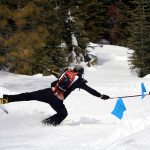 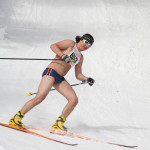 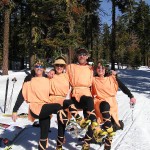 So, Mr. or Ms. Backcountry Skier, you want to be a nordic ski racer, you say? Maybe you watched the last Olympics, and marveled at the athletes and their amazing oxygen uptake and strength. Or perhaps a friend dragged you over to your local cross country ski area, and you – with your mega-wide boards and heavy tele boots – kept getting buzzed by a bunch of folks wearing colorful skin-tight lycra, leaving you feeling like you were standing still as they powered up the hill. OK, maybe you can live without the spandex; but still, it looked like fun. Those skinny little skate skis can sure fly over the trails.

But take heart: You don’t have to completely give up your gravity-desiring ways to experience a whole lot of fun competing on the local ski trails. There are lots of folk out there who jump into just one ski race every year. The Great Ski Race, from the Tahoe Cross Country ski area on the shore of Lake Tahoe to Truckee, is the largest ski race in the western United States, and over its 30-year history has become a truly community-wide event.

Held on the first Sunday in March, The Great Ski Race is a 30-kilometer competition (that’s about 18 miles for the metric-challenged) that has also become a national-caliber ski race, drawing some of the best skinny skiers in North America. Up until the mid-90s, the top racers had a local flavor, but since 1996, the men’s winners have been dominated by some of the nation’s top racers. Former U.S. Ski Team member Patrick Weaver of Bend, Oregon, has won four out of the last seven races. On the women’s side, Palo Alto’s Beth Reid took back some of the glory for the local women’s contingent in 2006 and 2007, but abdicated her title when she didn’t race last year.

Imagine over 1,000 skiers at the start line, hearts pounding, ready to ski some of the most beautiful terrain in the Sierra, and end up at one of the best post-race parties you’ll find anywhere. Did we say party? Well, for the first 100 or so competitors every year, the competition is the name of the game. But for the other 90 percent, the food and beer at the end of the trail, outside the Cottonwood Restaurant on the Hilltop in Truckee, is the trophy they strive for. The replenishments and refreshments are served in a festive atmosphere that includes live music and dancing in what, if you’re lucky, will be a day of warm Sierra sunshine. Best of all, the entire shindig is a benefit for an incredibly deserving organization, the Tahoe Nordic Search and Rescue Team.

The inaugural event was in 1977, with a hardy 60 racers braving the elements and terrain on traditional “classic-style” waxable skis. Jan Bjorkheim, a former University of Utah nordic champion, won that race in a time of 1 hour and 44 minutes, while Melissa Duffy took the women’s honors in a leisurely 3:05. Now, with ultra-light racing skis, pure fluorocarbon waxes, and the faster skating technique, the men’s record is a remarkable 1:06:51 (by Marshall Greene, also of Bend, Oregon, last year), and the women’s record is close-behind in 1:14:03 (by Brooke Baughman in 2005).

The first part of the course travels the rolling trails of Tahoe Cross Country, gently rising in elevation until meeting up with the “Fiberboard Freeway,” a logging road that leads up to the zenith of the course, around 11 kilometers into the event. The rest of the race is mostly downhill, but don’t let that fool you. There is still a long way to go, and for the top competitors, there’s no rest for the weary as they duke it out on the downhills, flats, and the few uphills that are still in store for them. From the high point, a steady downhill leads to the infamous “Whoop-de-dos,” a series of rollers designed by a Machiavellian groomer who must love to get air at his local terrain park, and then the hazards of the “S-Turns,” a series of steep, sometimes icy chicanes that often produce a yard-sale of carnage. After that, it’s smooth sailing for the last few kilometers, until the final gut-busting climb and then the narrow “Chute,” leading to the wide hill above Cottonwood, where the top racers tuck, the more skilled skiers wow the cow-bell rattling crowd with their tele-turns, and the rest of us simply to stay upright until we cross the finish line.

Besides the famous party at the end, The Great Ski Race archive is rife with classic stories. “Cow-Man” Ken Shirk is one of the famous characters in the race’s history. An eccentric North Tahoe athlete, Shirk wore a set of cow horns in all his races. Why? Nobody ever really knew. He ran marathons, rode and ran in ride-and-ties, and ski raced always wearing his horns and mooing his support to all the racers at the hardest parts.

One of the more famous stories in race history was the year in which Reedy, the race’s founder, tired of over-eager racers jumping the gun at the start line, formed a pact with his buddy Shirk. As Reedy explained, “I pre-arranged with Cow-Man to wear an old pair of skis, and convinced another friend to hide in the trees half way up the starting hill with a big double bladed ax. So when I started the countdown for the race start, Cowman began skiing up the hill with a few other skiers shuffling behind him. Out of the woods jumped the ax wielder and proceeded to chop off Cowman’s skis. All the ski racers froze. After we finally had a proper start, Cowman pulled his race skis out of the woods and finished the race with the top skiers,. I never had any problems with racers jumping the gun again.”

Another fun aspect of the event is the zaniness it brings out in some competitors – and spectators, too. Brightly-colored outfits and costumes abound in the later waves, with racers skiing along to the beat of their own drummer. Then there’s the traditional cheering squad of girls who stand alongside the course near the top, yelling exhortations to skiers both swift and slow. This tradition, begun in 1989 by long-time Search and Rescue member JoJo Toeppner (a former top finisher in her own right), has the crew dressed up as Snow Angels, French Maids, Hula Girls, Devils, and other wacky get-ups not typically seen in a national forest.

I’ve had my own share of great experiences in The Great Ski Race, from an 11th place finish one year to typically finishing south of 35th or 40th. After years of trying to compete at the top levels, I finally gave in and decided to see the race from a different perspective – from the rear. Some of my fondest memories of The Great Ski Race have been escorting my two kids on their first Tahoe to Truckee experiences, starting back in the higher-numbered waves and dressing up in true event spirit. It’s a different world back there, that’s for sure. From beer-bellied carpenters attempting their very first race, to casual moms out with friends (some even stop for a picnic along the way), some folks take five hours or more to complete the trek, although the majority is in the 1.5 to 3-hour category.

So, how should a rookie prepare for The Great Ski Race? Well, that depends on how serious you want to be. Most able-bodied skiers in decent shape have little problem negotiating the entire course, and there are two highly-welcomed food and aid stations.

You certainly don’t need to be an expert track skier to enjoy the race. All it takes is a little training to work up to being able to ski 18 miles, and some basic abilities (such as not crashing your way down every hill), and you should be set. There are even some great clinics during the winter (including the day before the race) to help get you to the finish-line party.

As far as gear goes, most any XC setup will work. But if you want to be somewhat competitive, it’s a good idea to use skating equipment – the lighter, the better. General-touring waxless skis will work fine, but avoid using wide, heavy, metal-edge backcountry boards if you want get a beer before the kegs are half empty.

For those looking for a good practice race earlier in the season that follows a similar course, there is the new Tahoe Rim Tour put on by the Far West Nordic Ski Association. Coming up on Jan. 25th, the TRT starts at nearby North Tahoe High School, traverses many of the same trails as The Great Ski Race, but takes a jog at the top and heads to Northstar ski area for its own finish and party. There is even a snowshoe division for the ski-challenged.

However you ski The Great Ski Race, whether as a super-fast competitor or as a casual tourer, it is one of those community-bonding events that you will enjoy year after year. Remember, the beer always tastes better at the finish line! 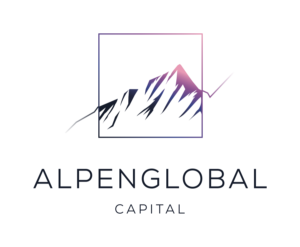